Here we are at the Marquesas Islands. Early morning of October 18, we anchored in the Taiohae Bay on the island of Nuku Hiva. 3,056 nautical miles and 28 days en route are behind. 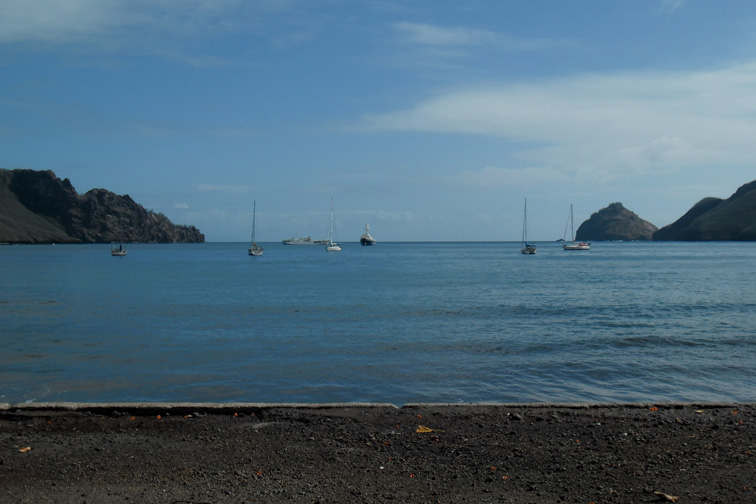 We entered it at night navigating by GLONASS. 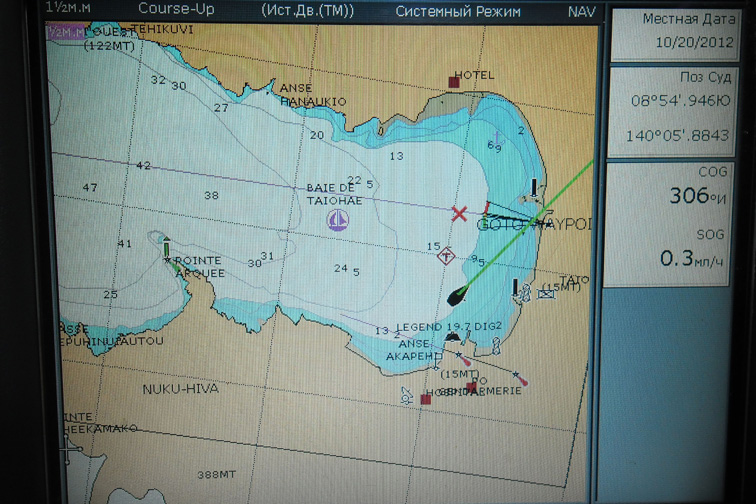 Heroic Sergei Morozov (yacht Hikari) helped us by working as a beacon. At 3 am, he was giving us strange signals with a flash light. 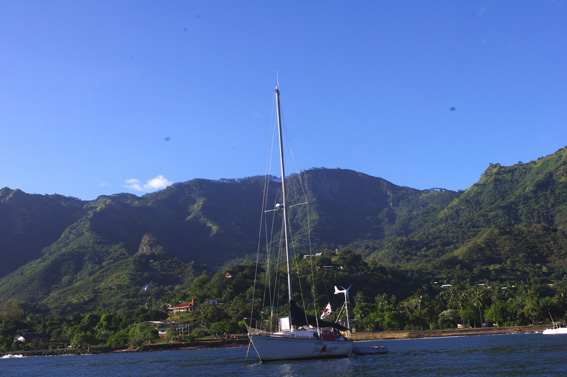 The boat looks terrible. After the passage it‘s overgrown with seaweeds and shells. 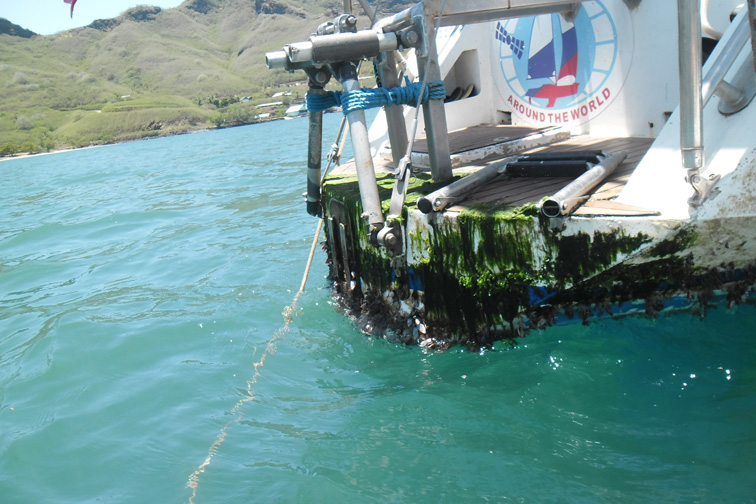 On the other hand, we can avoid restaurants and eat seafood right from the board as our neighbors, yachtsmen from France, were kidding. 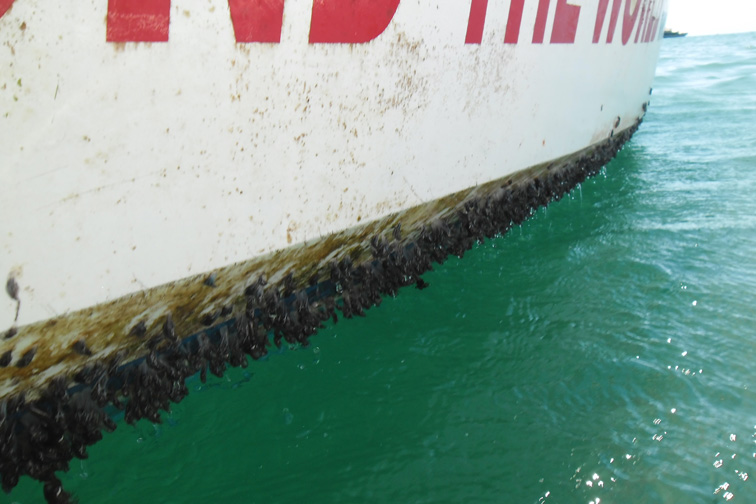 Never mind, we’ll have several days of rest and get everything in order. Only one thing troubles us… 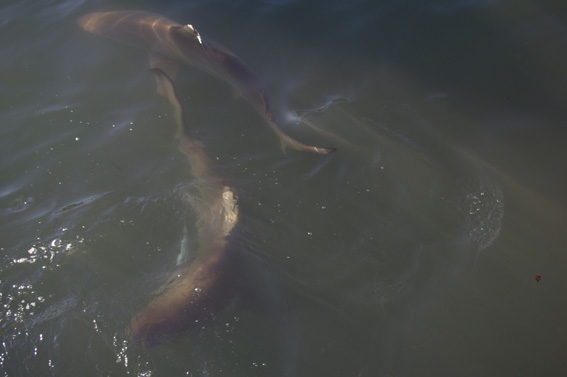 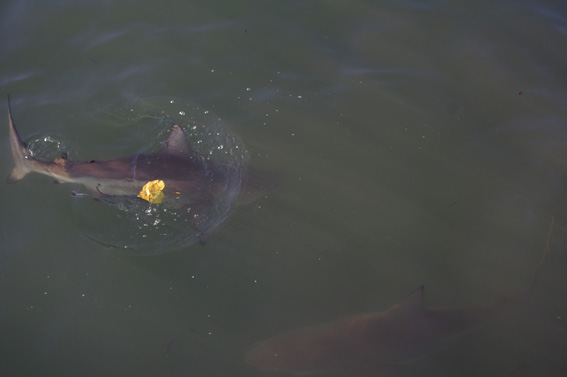 They say, these creatures do not to bite, however, we see no one swim from the boats around (we were the first to do that). 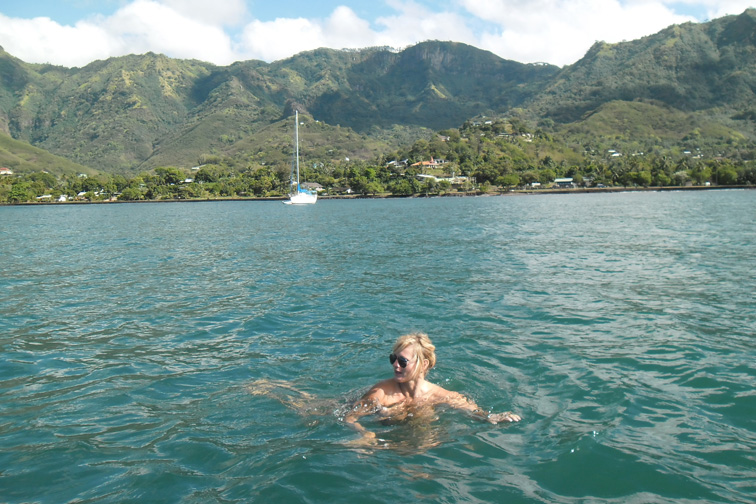 Frankly speaking, the capital is a bit strange. It looks more like a large peaceful village. 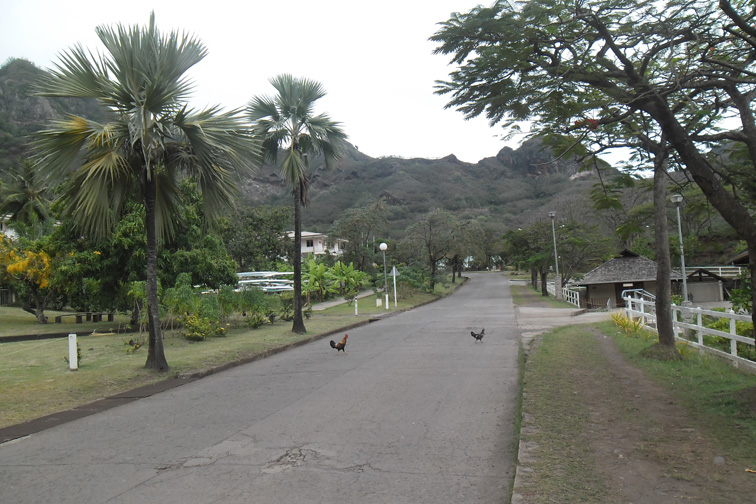 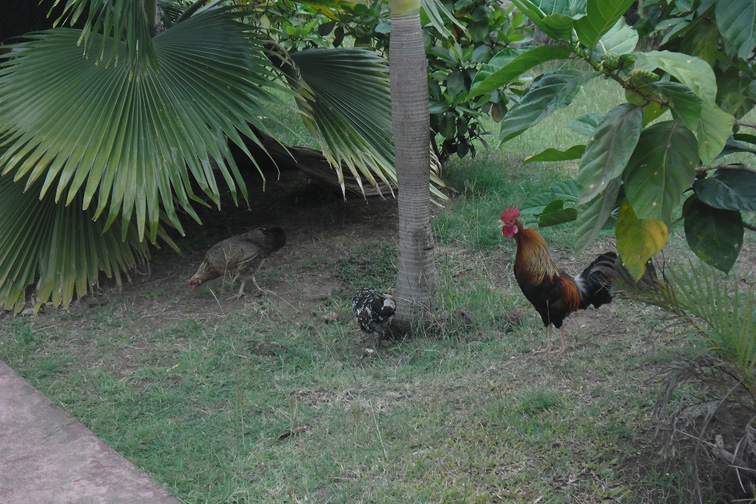 Yet, not a Russian village. 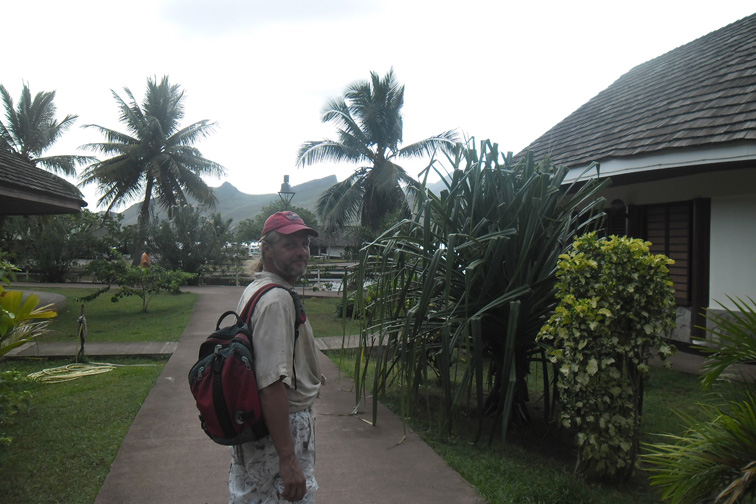 People with a laid back lifestyle. 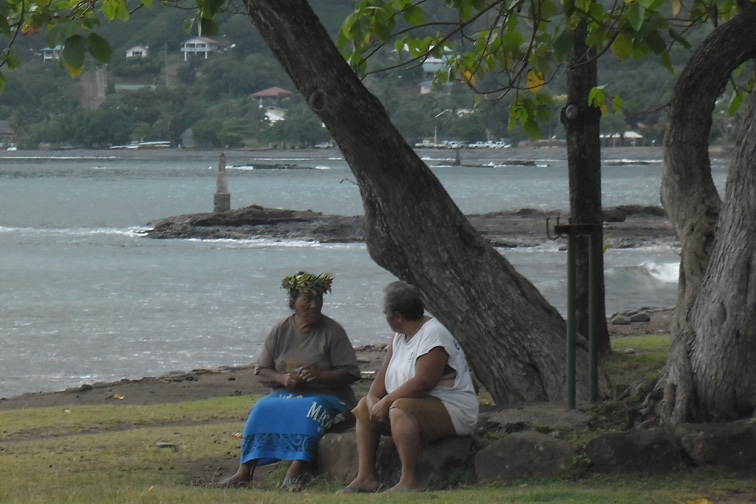 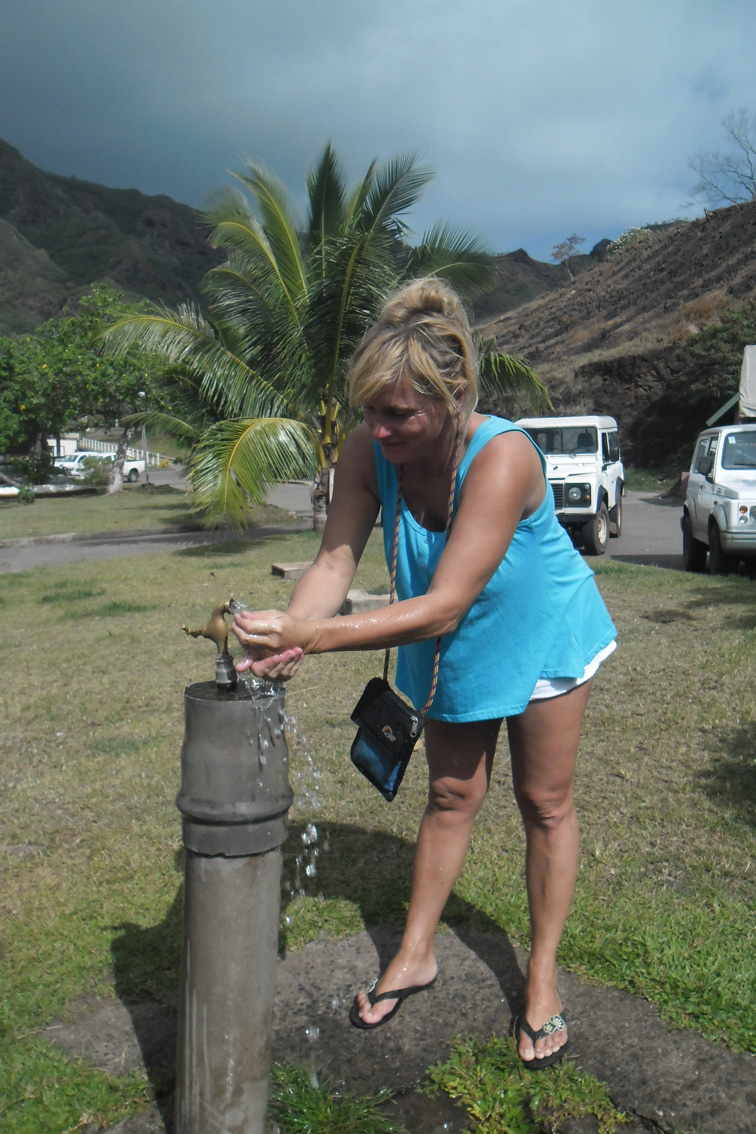 A fish market at the quay. 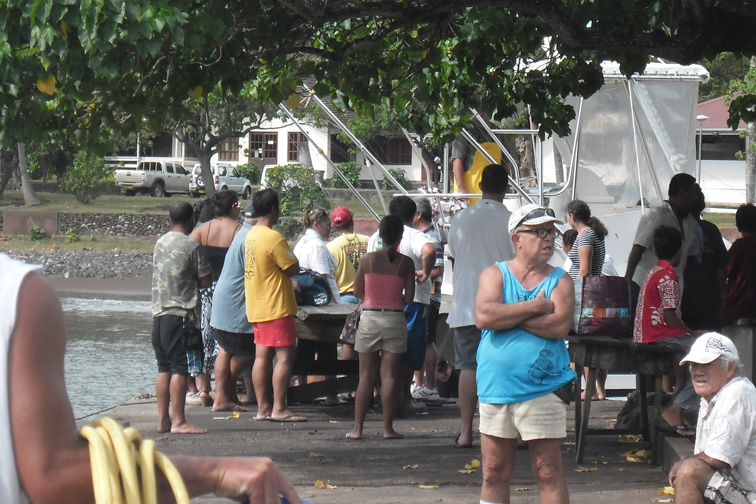 Peace and quiet all around. 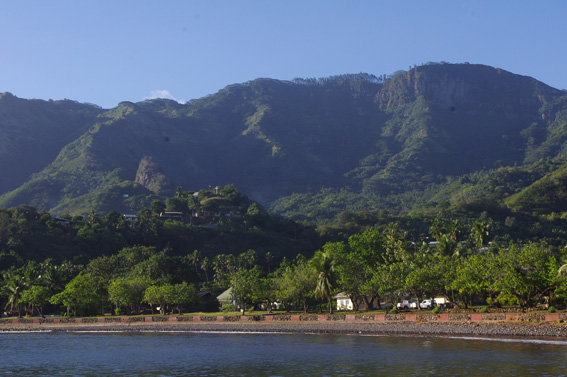 A village council and three flags (of the Marquesas Islands, France, and Polynesia) are in the center. 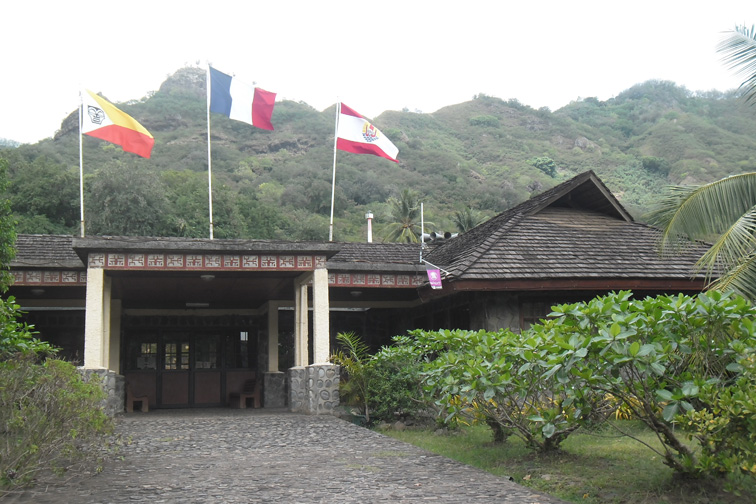 The local deity – Tiki – is depicted on the flag of the Marquesas Islands. 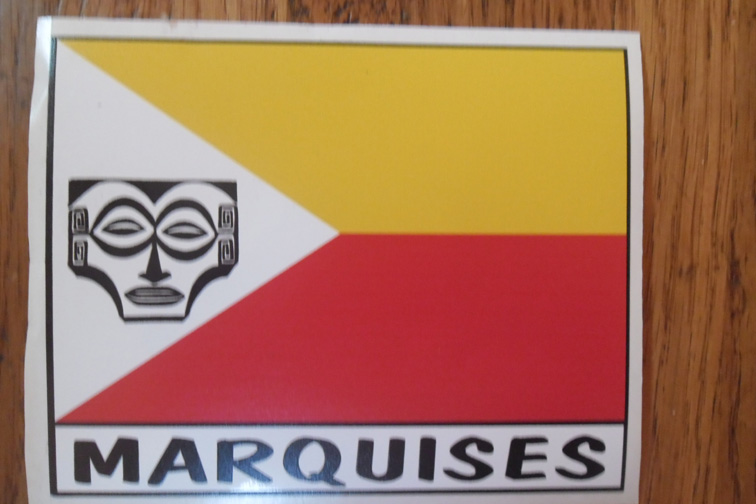 Tiki’s figures are everywhere: near each house. 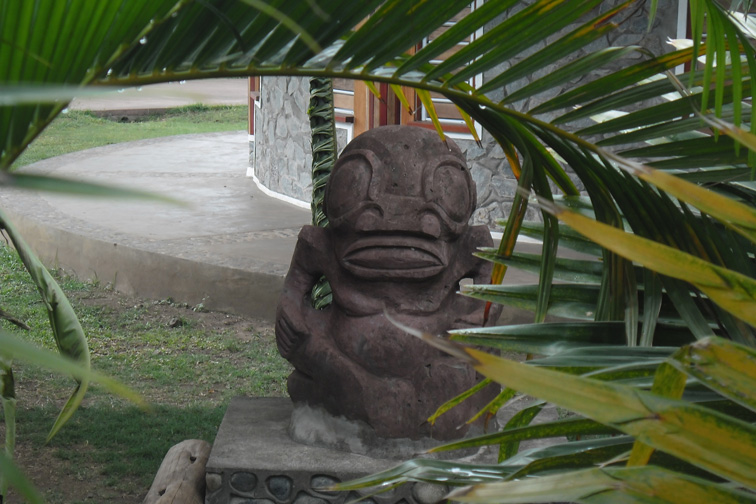 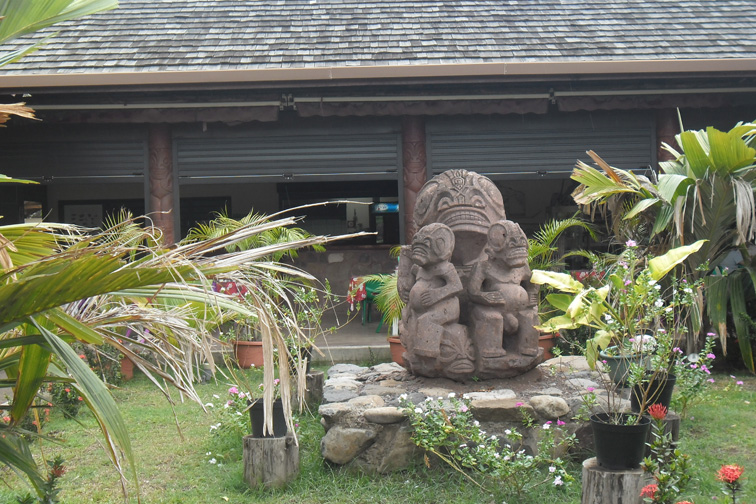 In the elements of street décor. 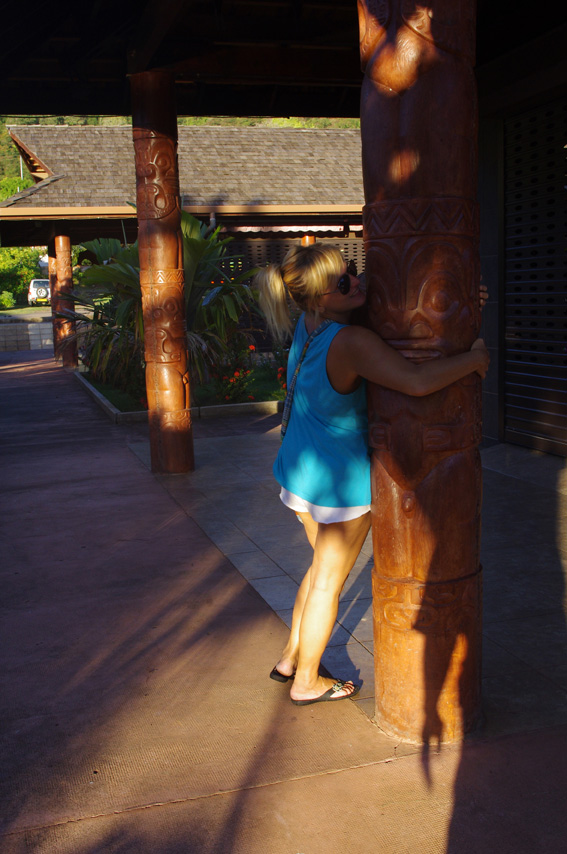 And flowers, palms, and fruit are all around. All sorts of bananas. 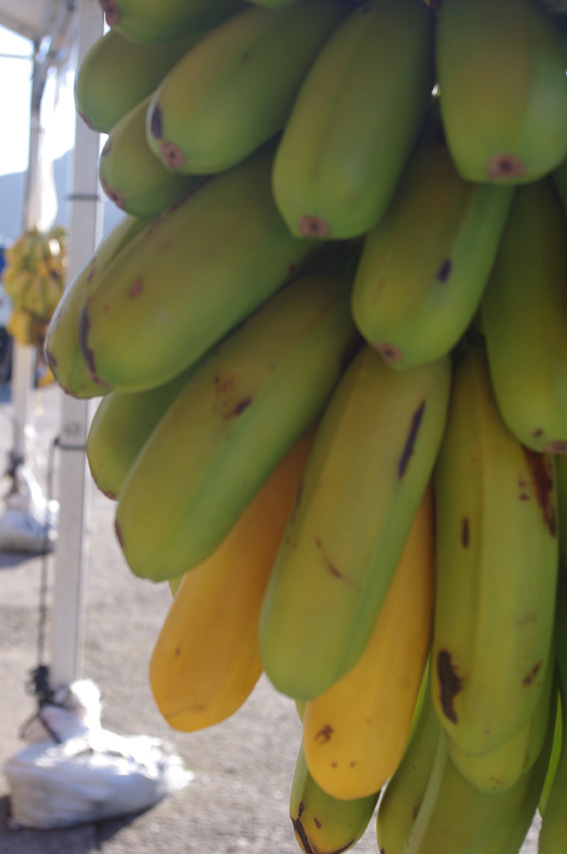 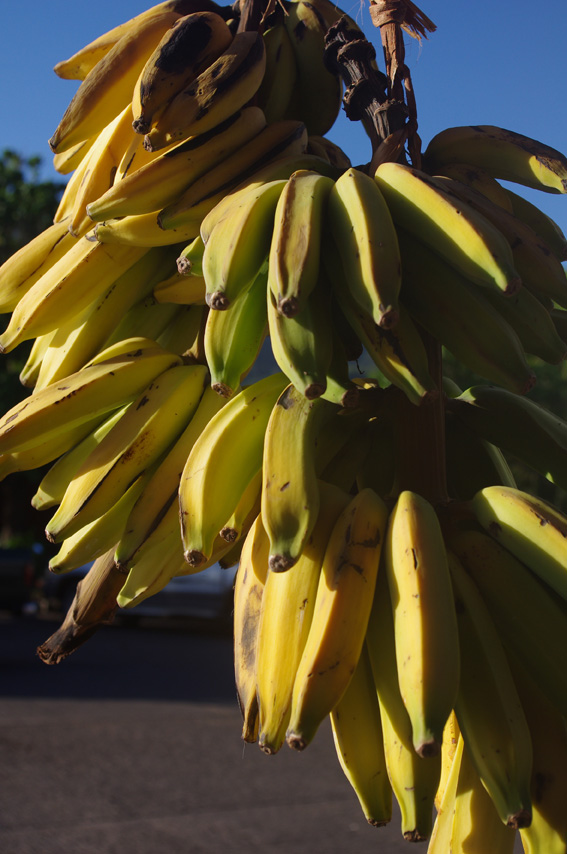 That’s how the pomelo grows. 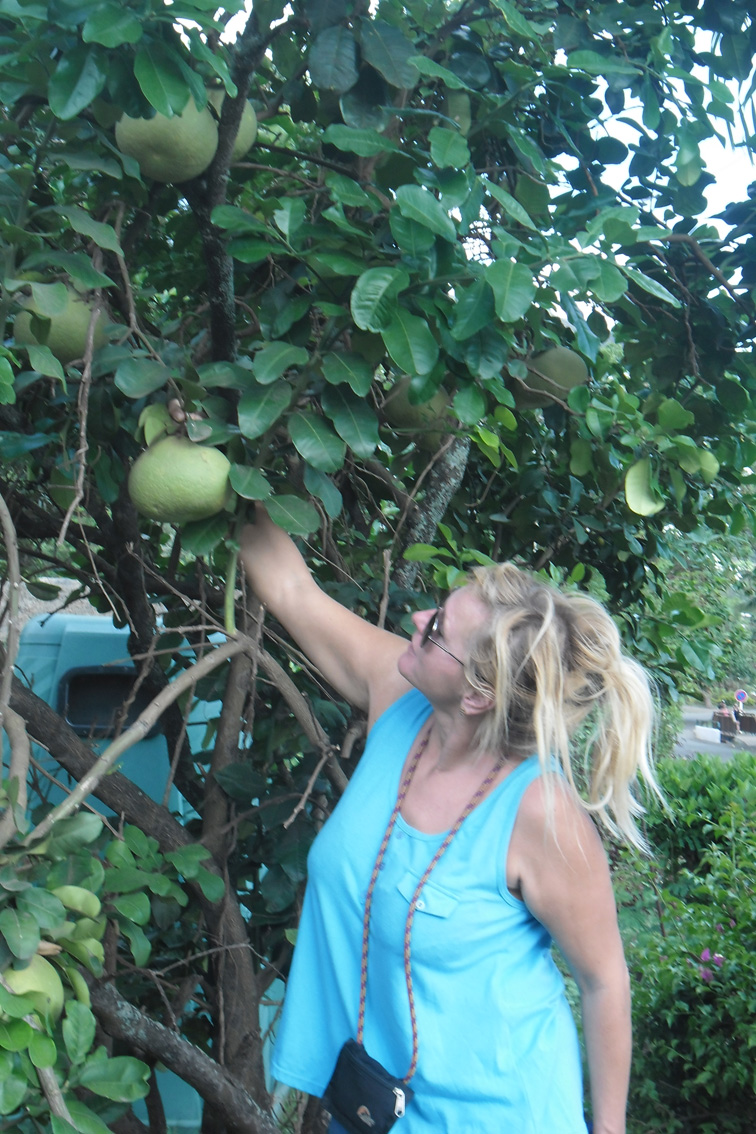 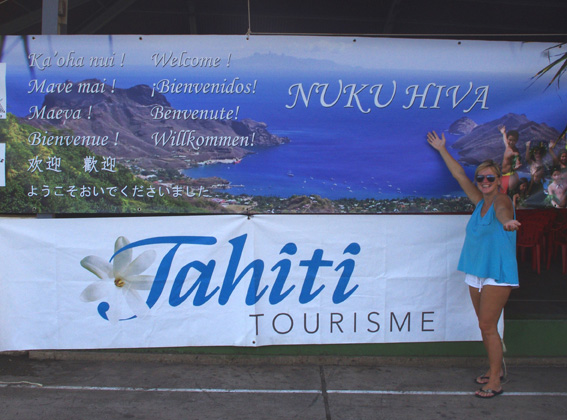 The official part is over. You can loosen your ties.

The first impression is that nobody cares a damn about anything. No customs, no border guards in tarpaulin boots, no roguish agents – nobody. It’s good if you pay them a visit. If you are too methodical, come to the police station some time later and register. We cannot but laugh recollecting our worries about a miserable case of vodka. We imagined us sneaking carefully at night like some smugglers… Idiots.

To tell the truth, we were rather afraid of Polynesia. The matter’s that all available sources assured us that Polynesia’s famous for two things – paradise beauty and prices high like hell.

The paradise beauty was offered already in the first bay. As you remember, we entered it by GLONASS at night, like prominent smugglers, and settled at dawn. The beauty around was unreal. You can see something in the photos but, believe me, in reality it’s much more fascinating. And, apparently, the further the more awesome. They already told us that there’s a bay with three waterfalls, one descending from the height of three hundred meters. So a thrill from the beauty is the second impression. Though, no wonder, as it’s not without reason that old man Gauguin moved here late in his life.

We were really scared of food prices and poor choice. There’s some logic in it – they need to supply food from France to Tahiti (by plane?), and only then to the Marquesas Islands – as they don’t produce anything at all here. Good people, who had been here before us, told us really frightening things. They strongly recommended that we buy some stuff in Panama to exchange it for something else with the locals – like a T-shirt for eggs. A story about a starving yachtsman who, crying and wailing, spends the last $100 on three eggs, a can of beer and a coffee bag was on our mind when we entered a local supermarket with bated breath. We hated the thought of starving and begging, especially in the paradise. This would have been really stupid.

The situation was aggravated by the fact that, right after dawn, there was a lovely smell of newly-baked bread all over the bay. After a month of eating canned food only, Lena was even whining and I was salivating like Pavlov’s dog, too. The moment of truth was approaching. Holding our breath, we looked at the shelves – God, there was EVERYTHING here!!! Marvelous French cheese, butter, smoked food, sausages, hot baguettes, rolls, sweet buns, milk, eggs, yoghurts, fruit, vegetables, greens, meat and poultry (frozen but looking great). The shelves were crammed with food. We couldn’t believe our eyes.

“All this is probably very expensive, see those 3-digit price tags,” Lena whispered, salivating and not taking her eyes from the shelves with cheese (she can give a lot for a piece of delicious cheese).

“Hold on! These must be Polynesian francs,” I supposed, stamping my foot.

“And how much is a franc?” she asked timidly and hopefully.

“One hundred franks is something like one dollar.” it appeared in my brain through a hungry mist.

“Should we multiply or divide?” Lena asked in a stupor and hungry pre-collapse.

“So that marvelous piece of Camembert costs three bucks???”

“Well, yes, it does, and that yummy bun with cinnamon, chocolate and fruit should cost a dollar.”

“And a dollar is thirty rubles?”

“How many buns you want?” a salesgirl asked.

THAT’S PARADISE was the third impression.