I vaguely heard a conversation between Lena and our son Kirill. To a regular question “What’s new in Moscow?” he said that there were traffic jams, that he was so fed up with mud and slush that he and his sister moved to our cottage. This made our cat Ginger, which got exhausted during the troublesome cat’s summer, infinitely happy. It’s well-fed now and its tail is fluffy. Daria, as a doctor, “darned” its paw and ear, treated it for fleas and flushed a purulent eye.

Kirill, in his turn, asked how we were, ‘’They say you‘ve met Sedov?”

We were given allowance, for the first time in the last six months we could take a shower with unlimited fresh hot water. We were allowed to wash our salted stuff and bed linen.
Andrey had his tooth treated. All Delta’s crew members were solemnly presented with Sedov label baseball caps. Boris had his dream come true – spent a night in the facilities of a sailmaker, on the sails of the legendary barque. Though, for want of habit, he got chilled in the conditioned room and he’s sneezing in a funny way for three days in a row.

Besides us, the boat was lucky, too. It was also thoroughly washed with fresh water and its water tanks were filled up. We were presented with new mooring lines, a coil of rope, five shackles, four snap hooks, a box of sealant, and a handful of stainless rivets. They offered us to take something else but, unfortunately, we failed to choose anything suitable for our micro size (compared to Sedov’s rigging).

Everybody was happy. As a good friend of mine says “It’s as good as to see your family.”

During the entire visit, our heads exploded from the flows of mental energy running through the steel boards of Sedov. Having become a bit wild after a year and a half at sea and pretty much unaccustomed to people, we got into a whirlpool of human relationships, aged on a year of Sedov’s isolation from the Mainland. There’s everything here – friendship and competition, love and homesickness, carelessness of a holiday and responsibility for work. During the three days, we saw just the top of an iceberg of relationships in the crew of a huge vessel, but that was more than enough to us. For the last two days, we try to explain to each other what exactly was going and interpret people’s reactions in particular situations. Often, some moments were even beyond Lena, who’s skilled in these issues, not to mention myself and Boris.

“Ah, how beautiful it is,” whispered Lena looking at the sails of the legendary barque disappearing in the evening twilight. Tears were running down her cheeks. 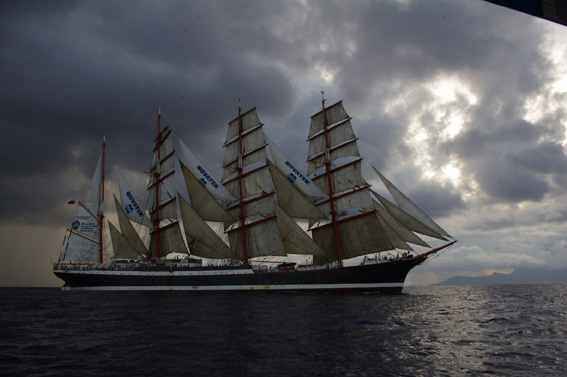